21 February 2018 – A Bahraini criminal court sentenced prominent Human Rights defender, Nabeel Rajab, to five years imprisonment relying on posts on his Twitter account in 2015 as well as retweets about alleged torture in Bahrain’s Jaw prison, and the killing of civilians in the Yemen conflict by the Saudi Arabia-led coalition.

25 January 2018 – Several elements are strongly suggesting that the safety of Nabeel Rajab is endangered, as he is in deep need of medical assistance and the conditions are not gathered for the medical care offered by the Ministry of Interior Hospital to be considered adequate, trusted and reliable.

15 January 2018 – The Bahraini Court of Cassation in a final decision upheld the two-year sentence of Nabeel Rajab for the case related to his participation in televised interviews. The Twitter case is postponed for the 20th time, the final hearing rescheduled to the 21st of February.

7 December 2017 – While the hearing for the Twitter case was scheduled on 31st of December, the Bahraini authorities changed the date to the 5 December, giving the defense very short time to adapt. Finally, it was adjourned and supposedly taking place on the 7 December, to finally be postponed to the 15 January.

22 November 2017 – Nabeel Rajab’s sentence to two years in prison for speaking to journalists was upheld on 22 November 2017 by a Bahraini appeal court at the conclusion of a long-running, unfair trial.

19 November 2017 – The hearing on the case relative to the tweets is postponed to the 31 December. AS the employee appointed by the Ministry of Interior was unable to give any evidence regarding the IP related to the tweets, the Court pretended the need for additional research and requested a technical report about the Twitter account from which the tweets were posted.

8 November 2017 – Nabeel Rajab’s final hearing for the appeal in the case of the televised interviews is postponed to the 22 November. The Bahraini court refused to hear defense’s arguments and rejected his petition for bail.

26 October 2017 – Alarming reports assert that Nabeel Rajab has been subjected to degrading treatment following his arbitrary transfer from the Ministry of Interior Hospital in al-Qalaa to the Jaw Prison, including humiliating search and forced shaving of his hair.

25 October 2017 – Nabeel Rajab’s appeal in the case of the televised interviews is postponed to the 8 November.

27 September 2017 – The hearing in the trial related to the tweets is postponed to the 19 November. Ths is the 16th times a Bahraini court adjourned a hearing in that case.

8 August 2017 – A Bahraini Court decided to postpone issuing its verdict in the case of Nabeel Rajab.

10 July 2017 – Nabeel Rajab was sentenced to two years on his case related to televised interviews. His second trial for tweeting and re-twitting is on the 7 August.to postpone issuing its verdict in the case of Nabeel Rajab. 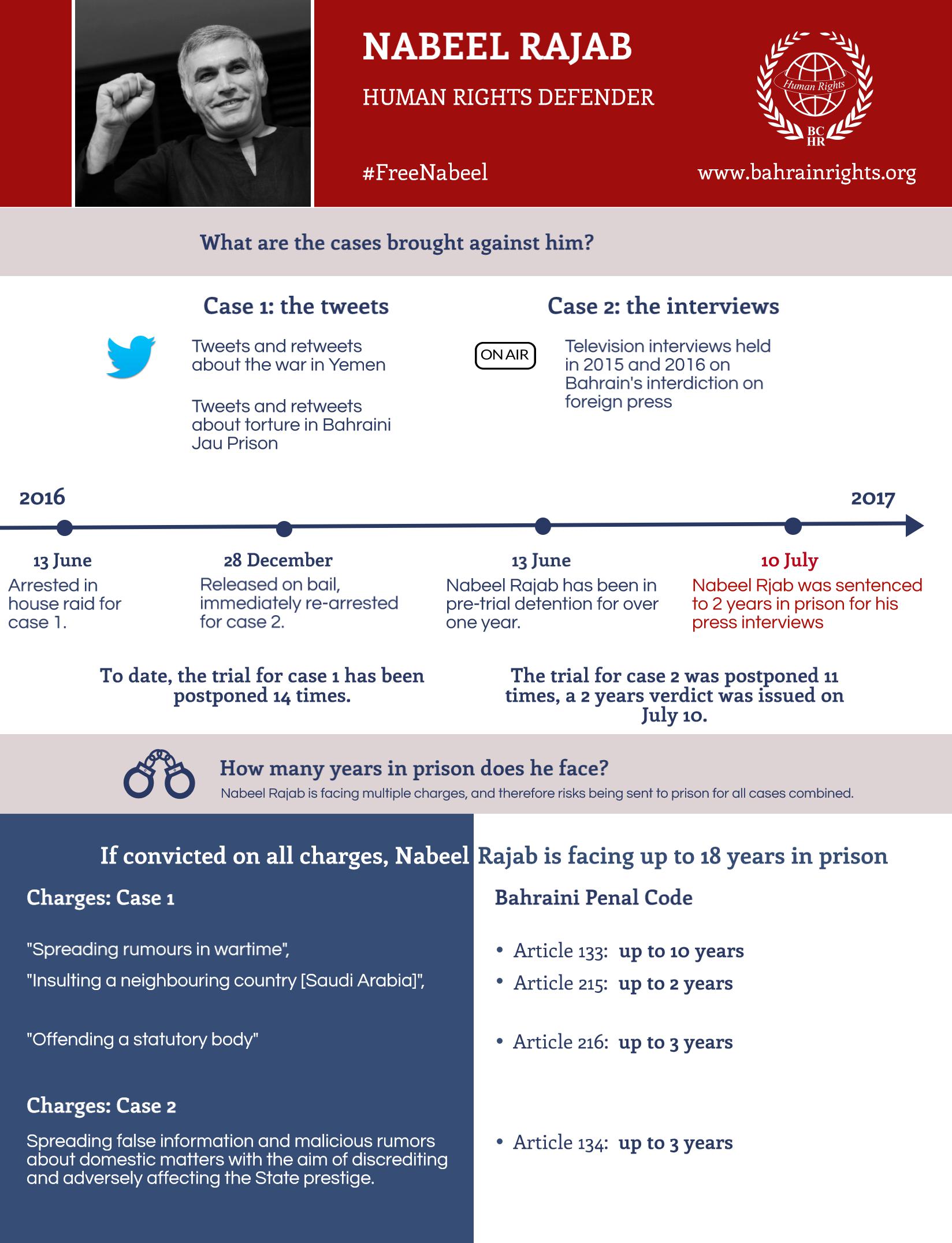 6 July 2017 – Within a press briefing, the US state deparment expresses concern over the trial of Nabeel Rajab

4 July 2017 – According to updates received from his family, Nabeel Rajab is expected to receive a sentence on Monday 10 July in one of the cases against him. His lawyers received a notification on the ruling a day after after the hearing scheduled for 3 July. Rajab is currently facing a case related to press interviews criticizing Bahrain’s human rights record, for which he is facing 3 years in prison, and a second case related to tweets and retweets on allegations of torture in Bahraini prisons and the humanitarian crisis in Yemen, for which he might receive 15 years imprisonment. Based on his family’s testimony, the Court did not hear the defense during yesterday’s trial.

3 July 2017 – The court hearing on press interviews was held in Rajab’s and his lawyers’ absence. The lawyers have boycotted the trial since 14 June, when they walked out of the trial because of the court’s insistence to hold hearings when Rajab cannot attend the court proceedings. His doctor at the Ministry of Interior hospital has stated that Nabeel cannot be charged.

2 July 2017 – Trial related to press interviews adjourned for 3 July, neither Nabeel Rajab nor his lawyers attended. Rajab is still recovering in hospital. He was allowed to contact his family but not his lawyers.

27 June – Alarmed by Nabeel Rajab’s detention mistreatment, the Chair of the Subcommitte on Human Rights, Pier Antonio Panzeri made a statement urging the authorities to respect Rajab’s freedom of expression and provide him access to family and lawyers.

21 June 2017 – According to his family Nabeel Rajab faces worsening treatment in hospital, where he has no access to his family and lawyers. Autorities are also making pressures to move him back to detention.

14 June 2017 – The trial related to press interviews is postponed to 2 July for the 11th time, and the second trial on tweets and retweets again postponed for 7 Augustfor the 14th time.

13 June 2017 – Nabeel Rajab has been detained in pretrial detention for one year. Rajab’s trial related to TV interviews was postponed for the 10th time to 14 June.

16 May 2017 – Nabeel Rajab was denied bail and his trial concerning TV interviews with international media was postponed for the 7th time to 30 May.

11 May 2017 – Rajab is recovering from his medical condition and remains in Qaala clinic, which is a division of the Ministry of Interior. According to information received by BCHR, his weakened immune system is slowing down the recovery process.

8 April 2017 – After a brief family visit, Nabeel Rajab has been rushed to hospital in an ambulance.

5 April 2017 – Family members of Nabeel Rajab report that he has undergone surgery for bleeding ulcers. His family was denied right to visit. After surgery he has been sent back to solitary confinement, despite further need of medical care.

22 February 2017 – The trial based on charges related to tweets was postponed to 22 March to hear the testimony of the investigation officer, and to allow access for Rajab’s lawyer to have a copy of the evidences

8 February 2017 – Rajab’s trial related to the case of televised interviews has been postponed to 21 February.

In one case, where Rajab is prosecuted over two charges both in relation to tweets and retweets posted in 2015 about the war in Yemen and also about allegations of torture in Jaw prison after a prison riot in March 2015. The first charge is “insulting a statutory body” (Article 216 of the Bahraini Criminal Code) referring to the Ministry of Interior in relation to tweets he posted denouncing the torture of detainees at Jaw Prison.